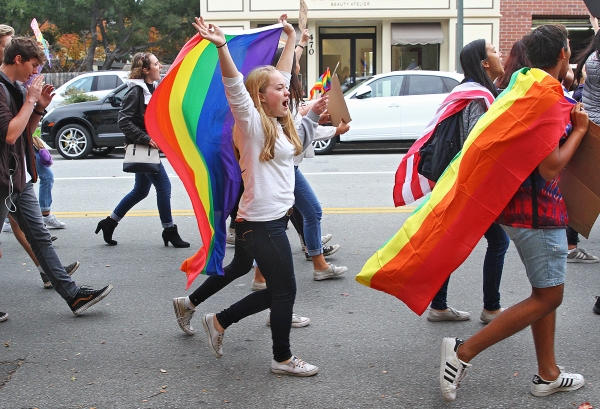 Being a violent protestor or pacifist victim can both lead to increased levels of mental strife, but there’s a sweet spot in between these two where the injustice fueled passion creates the energized purpose that will bring meaningfulness to one’s life. A result can be a lifting from depression and/or calming of the anxiety.

There are widespread demonstrations throughout the country; high school and college students are protesting just as vehemently as the adults, if not more so. They are angry, and those who have not developed a healthy and productive way to express and act on it may become anxious and depressed, especially those fearful of the changing policies toward sexual orientation, religion, immigrant status and gender.

In a country with unprecedented levels of adolescent and college age anxiety and depression, this could escalate the crisis or be an opportunity to channel these strong emotions into positive activism.

Mindfulness teaches the skills of being in the moment, observing life as it unfolds with awareness and non-judgment. Oftentimes the judgments are ruminations about the past and worries for the future, thoughts that are meant to pass without hooking us. My struggle recently has not only been the intensity of my own worries, but their validity. I have reason to be worried, and I am angry about the divisiveness in America, but I haven’t mastered how to express anger in an awakened way.

By attempting to squelch the negativity and live from a higher state, there can be unintended consequences, When I’m really triggered, the kind that puts me over the edge, I either go into “Fight, Flight or Freeze” modality, pre-frontal cortex totally offline, and I write and speak in automatic pilot. I’m not used to expressing constructive anger, so bottled up rage, mostly from not knowing how to express itself, spews out. That is not helpful and ultimately creates more anxiety.

My more common mode is to dismiss the internal anger, looking for the bright side too quickly. “Positive intentions.” “Focus your attention on your ideal outcome.” “Trust that things are meant to be,” all become platitudes in the face of what really unravels my sense of the world. Freedom to be one’s authentic self is being threatened. After all the progress achieved in the 20th century toward a more equal America, racist and sexist slurs abound again, and the global unity I’ve aspired to through the Dalai Lama’s teachings and Nelson Mandela’s Ubuntu seem so much further away. To not be angry is to become depressed.

Being a violent protestor or pacifist victim can both lead to increased levels of mental strife, but there’s a sweet spot in between these two where the injustice fueled passion creates the energized purpose that will bring meaningfulness to one’s life. A result can be a lifting from depression and/or calming of the anxiety.

It’s hard work. How does one do it? How does one take the anger ignited by the injustice, the inequality, the racism, sexism, and homophobia, and turn it around for the good in a productive and enlightened way? There must be a middle ground that brings about change on the planet with humanity and the environment bonded together like a singular cellular body, as opposed to one filled with disease and fraction, like a cancerous tumor.

November 29 is #GivingTuesday and there are a myriad of ways to channel your energies toward helping others.

American Promise, the movement for the 28th Amendment to remove corporations from American government, is one of the most worthy causes in our country today. Any Social Movements, especially environmental ones, like Standing Rock, that challenge the corporate profit margin, have little chance of moving forward with businesses’ billions.  The first step in the activism toward equality for women, immigrants, and LGBTQ movements MUST start with American Promise’s goals.

Yoga Reaches Out is the non-profit of the month at SusanReynolds.org. All proceeds from yoga and mindfulness classes at The Space will go toward YRO’s #GivingTuesday campaign.

Billion Acts of Peace has a challenge that allows you to join an existing cause or create your own in their November Take The Challenge. NBC #ShareKindness invites you to join the campaign by simply sharing all the acts of peace and kindness that you, your organization, school, business or club participated in between November 28th and December 31st that helped others in your community, or simply made someone’s day a little better. Here is another fantastic way to channel strong emotion into positive causes.

Do Something is a wonderful way for teens and college students to find issues that motivate and excite them, helping them feel connected to a greater community of caring.

SusanReynolds.org is a Presence~Passion~Purpose Portal for this type of action. You can get involved with local, national and global causes and make a difference.