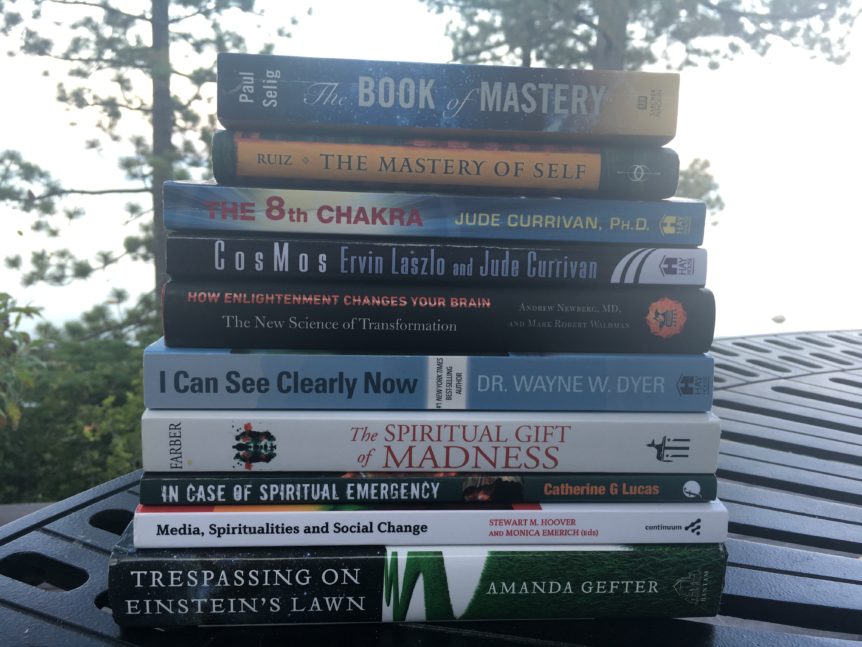 19 years ago I experienced a Post-Partum Spiritual Mania where my thoughts and ideas ramped up in a divergent and disjointed way at a pace few could match. I thought fast, talked fast and wrote fast, and it wasn’t just the speed, it was the way I communicated, linking everything like a large interwoven network.

In June 1997, I knew, without a shadow of a doubt, that we were all one, cosmically, as well as interconnected by the emerging technological age. I ascribed to Don Tapscott’s theories and Nicholas Negroponte’s 2b1.org. Ultimately, I believed we could communicate with the Universe through the energy of the Internet.

As I espoused the theories of quantum physics without having ever studied them, I spoke of parallel universes and past life memories. Oprah’s Angel Network was in its formative stages, and I joined it when I sent a letter pledging my support. But mostly I talked about wanting to heal the pain of the world.

During this time I conceived of ABC Legacy: Atoms to Bits Children’s Legacy. The movement from the analog to the digital age, and the increased use of the World Wide Web, was going to enable us, as parents, to teach our children to care about other children around the globe. My husband and I started the idea through small neighborhood groups, including our young children Brittany (5) and Olivia (6 months), with the intention to expand from local to global.

The ideas were somewhat sound, but there was a problem. My thoughts were too rapid. My feelings too chaotic, and when I began crying, as I sat near the books on the Holocaust in the Fenn School library, feeling the despair of victims in concentration camps, something seemed odd. Others told me I was in the manic phase of bipolar disorder. I was crazy, or at least that’s what I thought then.

Half the world defined my experience as bipolar disorder and the other half as a spiritual emergency. It took me two decades to sort out my understanding of the event and what it meant in terms of mental health, spirituality and the intersection of the two. I’ve read everything by Stanislov Grof on Spiritual Emergencies. I’ve researched the Mad Psychiatry movement as well as the Spiritism Hospitals in Brazil. When I studied Yoga and Psychology with Mariana Caplan, she was the first person to explain that what I really needed at that time was a spiritual counselor, not a western psychiatrist.

I’ve since found the spiritual psychiatrist at McLeans SE. Jeffrey Rediger wrote a wonderful article in Spirituality and Health. When I met with Jeffrey, he applied his study of spontaneous healing of Stage 4 Cancer to spontaneous healing of mental illness like schizophrenia. My key take away was his belief in “What’s right with you?” as opposed to “What’s wrong with you?” When Dr. Rediger told me that people like me need to be taught the developmental steps, over time, to live in both the physical and spiritual world, my view of myself shifted. No one ever said that to me before.

Mental Illness is not always as it seems.